Where can I drive?

There are predominantly two kinds of roads that can be driven or ridden “off tarmac”, BOATS and ORPAs. The best way to locate the physical location of these lanes is to look at an Ordnance Survey (OS) map. Once you have identified where the lane is, you need to establish whether or not it’s legal to used a motorised vehicle (MPV) on it or not. For BOATS they should appear on the definitive map, for ORPAS they should exist on the List of Streets as “maintainable at public expense”. If in doubt ring the council and double check. Alternatively you can look on SmartTrail and/or check with your local All Terrain UK Rep or Ambassador.

The best scales of OS map to use are either 1:25K Explorer  or 1:50K LandRanger maps, the legends for the two scales are shown below.

BOAT – Byway Open to All Traffic – part of the Public Rights of Way network, and will appear on the Definitive Map for the county. Some councils have an online version of the Definitive map which can be useful for determining if the lane has motorised (MPV) rights or not.

An example of a BOAT on an OS map 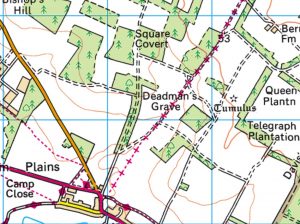 ORPA – Other Route with Public Access – these were also traditionally known as UCRs – Unclassified County Roads – part of the Highways network.

An example of an ORPA on as OS map 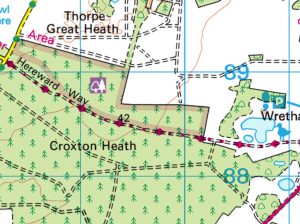 Other parts of the Public Rights of Way network such as footpaths, bridleways and restricted byways are not permitted to be used by motorised vehicles. It is very important to keep to the legal route as in the UK it is an offence under Section 34 of The Road Traffic Act 1998 to drive a vehicle any where other than the highway without the land owner’s permission. The Police may also use powers under Section 59 of the Police Reform Act 2002 to seize and crush your vehicle if repeatability used in an “anti-social” manner.

It’s also worth noting that since the NERC Act came into effect in 2006, many routes that were previously useable have had their MPV rights removed.

You can also drive on Permissive Byways where the signage clearly shows this, and example permissive routes are some of the routes that run across Salisbury Plain, which has its own set of bylaws that you must abide by. Its is also worth noting that on Salisbury Plain there are existing Public Rights of Way (BOATS) that can be used subject to Red flags not flying.

Forestry England sites (for example Cannock Chase, New Forest, Thetford Forest, Sherwood Forest etc) do NOT allow you to use their forestry tracks unless explicit permission is given. Without permission this equates to “off-piste” aka leaving the legal route and that could result in a Section 34 and/or Section 59 being issued by the Police. However using existing public rights of way ( BOATS) and ORPAs that run through the forest are still permitted to be used by motorised traffic.