If your interested in vehicles and how they are made i cannot recommend getting yourself on a factory tour enough!

We opted to attend the “range rover/discovery” three hour tour and had to arrive at the solihull factory by 0900, in the event we arrived just after 0830 but the tour organisers let us in and provided us with fresh hot drinks and we had time to relax a little before the tour started.

We were organised into groups and taken to various locations around the factory in special extended defenders, our first impressions of the site were of the sheer size of it all, there is a school for children who’s parents are working there, an purpose built A+E department, sports grounds, social clubs and a dedicated fishing lake, not to mention a full off road course in the woods!.

Our tour started in the press shop and we were able to follow the flat sheets of aluminium as they went through the press and emerged as various sections and panels to be assembled later on. this particular building is sunk into the ground and the press is mounted on rubber foundations in order to stop the surrounding towns and houses from experiencing earthquakes!

We then went to the body assembly plant where the multitude of robots bonded and riveted the panels into a body, the numbers are staggering, for example one rivet gun costs around £300,000, one die set for a panel [and there are dozens] £800,000!

From there we watched the front and rear sub frames being fitted then the engine/gearbox assembly’s, this along with seats and interiors, until finally they emerge to be started up, one every 130 seconds or so 6 days a week and 24 hours a day, more impressive is that each car is already ordered and sold to a customer, 90% of which are for export

We came away full of facts and figures and genuinely impressed that 5 billion had been invested in the plant by owners Tata, if you get a chance try and get on the tour, its a well spent £49!

some of last nights production! 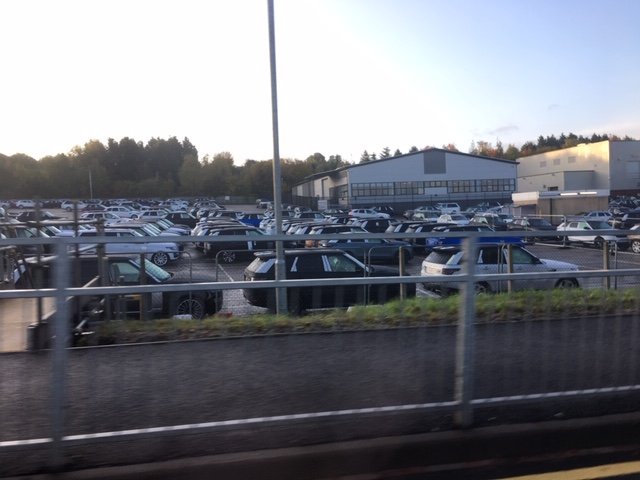